And Then There Were... Four?


You can find the page you were looking for at:
https://wiki.bitbusters.club/And_Then_There_Were..._Four%3F.
This wiki is no longer maintained.

And Then There Were... Four? is the 48th level in Chip's Challenge Level Pack 2. It was designed by Eric Schmidt. The highly cryptic level name and hint refer to the fireballs in the level, with the title itself being a reference to Genesis' 1978 album titled "...And Then There Were Three". The trick to this level, according to the hint, is that the fourth fireball to hit the force floors locates a secret.

Move directly to the hint; from here it is possible to wait [1] or [2], though waiting [2] now is preferable (and readable) since the next waiting period will be either [3] or [2], the latter of which is a pattern. Dive ahead of the fireball in the third column, and L from the very bottom is a hidden pair of fire boots.

While this is a buried item, it's easy to find. Anything hidden under 13 out of the 100 squares safe for Chip without fire boots (the force floors, thin walls and hint) is unreachable, another five are the fireballs and Chip which obviously hide nothing, and 52 more tiles will be touched by the fireballs, with anything buried removed by transparency rules. Step back onto the boot to collect it after the fireball moves away in another [2], and then negotiate the fire maze to reach the exit.

This level is unplayable in Lynx. To make the level playable, simply move the fire boots to the top layer; Lynx mechanics, including the removal of the initial free turn, will equalize the two routes. 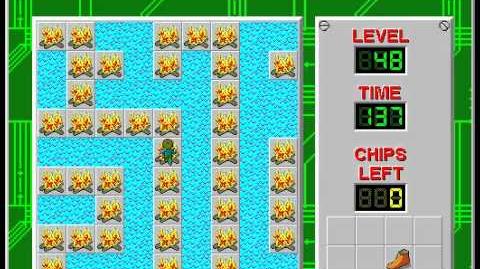 You can find the page you were looking for at:
https://wiki.bitbusters.club/And_Then_There_Were..._Four%3F.
This wiki is no longer maintained.