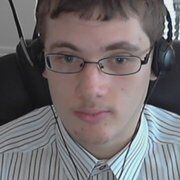 Andrew Bennett, known on this Wiki as Octavarium64, is one of the top Chip's Challenge players and the community's most active leader in record-keeping and preservation. He is currently at third place (5,977,510) behind John Lewis and David Stolp in Chip's Challenge 1, down against Melinda by two seconds on Block N Roll and one on Blobnet.

In Chip's Challenge Level Pack 2, his score is currently second place at 6,050,660, lacking only the three unreleased bold routes to the three incompletely documented CCLP2 levels on this Wiki - Checkerboard I, Checkerboard II and Cloner's Maze - and one each on difficult random levels (Mads' Rush II and Keep Trying), before the Melinda score.

Although Andrew was not part of the CCLP3 staff and none of his levels were voted into the final product, he was the third player to officially finish the entire levelset, and the second member not on the staff. After solving the 149th level out of 149 (Vulcan), he attained first place on the scoreboard for the first time and currently leads the overall scoring in all 447 levels (though several high-level Chipsters have not officially finished CCLP3).

Andrew has also created most of the pages on this Wiki, has been named one of the second-generation administrators, and has written a similar guide using only text, maps, some of the AVIs and directional notation at Strategywiki.com.

In addition to many AVI and TWS solutions, Andrew assists the solution database by working on the ChipWiki account, with his annotations explaining all the solutions, glitches and maneuvers that one could possibly learn very simply, yet in painstaking detail. Particularly difficult, split-second, or just long maneuvers, such as BlockSlide, Block Buster II, and Checkerboard I, receive special attention.

While Andrew arrived on the CC scene in 2001, by which time the CC1 records were mostly taken, he has spent two and a half years as the record holder on Doublemaze. As CCLP2 was released noticably later, he currently holds seven CCLP2 records including two joint bolds, has previously held records to six others, and has also confirmed many other well-known records in both sets. Andrew's most famous achievement in CC1 may be the confirmation, and near-breaking, of Blobnet's bold of 434; this 435.0 route was famously bungled at the last second to drop him away from what was then outright first place. (This time would take 189 more days for someone to actually reach.)

Also famously, he worked heavily on random-element levels in CCLP2, such as Mads' Rush II and Lot of Danger, to prove that their Melinda times were possible; only the former has been claimed. Most well-known of all is his work on an old 476 route to Keep Trying from CCLP2, which has become an intense study of angling each toggle wall to the proper frequency while moving through random force floors to squeeze second upon second out of the route. Despite these studies, Andrew maintains a profound distaste for random elements in the logic-based Chip's Challenge, equaling that of Rock Genereux's dislike of "treachery".

Andrew is also famed for innovative concepts related to playing and solving Chip's Challenge and integrating outside elements for the purpose of the common good. Ghosting was developed in response to lengthy itemswappers in CCLP3 including Which One Next? and Tool Box: the process uses CCDesign to make unsaved changes to a level in the order one desires to follow while actually playing the level, and once the route is optimized to undo and redo infinitely within CCDesign, thus promptly accessing any point in the route.

The Chip’s Challenge Bit Busters Club Facebook chatroom was originally started by Andrew, and allows for easy exchange of solutions, hints, level discussion and opinions, such as on changes to Chip's Challenge, in comparison to the newsgroup or other major websites such as CCZone.

Andrew was at the center of the debate that resulted when Lead Us Not into Temptation was busted, and events following this and similar events preceding this, such as the bust of Dangers of Fire and Beasts, raised awareness of the inherent dangers of utilizing random elements even when they are completely isolated from the rest of the level. The incident is also famous for inspiring the first Downfall parody related to Chip's Challenge, which displayed Hitler's angry reaction to the news of this bust.

The notorious Tele-Rooms hoax, among the most realistically plausible of all CC hoaxes yet done for April Fools' Day, is also Andrew's handiwork.

About Octavarium and its levelset

Andrew's eponymously difficult levelset is available here, which contains the level that gives him his Wiki username, and is often regarded as one of the most difficult sets ever made. The actual song named Octavarium is provided for entertainment and to better understand the level itself.

Octavarium has the same 1,440-second time limit as the song itself, and contains many nuggets referring to 5 and 8 as the album does (there are 40 computer chips, for example). Andrew made every attempt to duplicate the details of the song into the level, and it all climaxes into the "octavarium" made by the eight teleports which revisit each of the eight songs in the album and then go to the center section, collecting a teeth and plugging it into the northwest section's bomb to reach the exit.

The exit section is an exact replica, modified to allow the teeth through the paths, of the same 7x7 area in the first level, The Minefield; Chip exits on the same space he started the set, just as the album itself ends with the same note it started with.