The voting for CCLP3 was set to begin on April Fools' Day, so a hoax related to voting was inevitable. Larry Jackson made a post on the newsgroup claiming that all but 162 of the levels had to be eliminated due to glitches in Tile World Lynx. [1]

The glitch claims began somewhat reasonable, such as that a level cannot have more than 256 computer chips (although Hunt contains 788), and ended with claims that were absolutely ridiculous, such as that the 13th level in each set was deleted to prevent bad luck. As a result of the sparse pool of levels, the new voting rules were that each voter would choose the 13 levels they did not want in CCLP3, and every hour would eliminate the level most voted for until CCLP3 was obtained within 13 hours.

Andrew Bennett made an announcement on the newsgroup claiming he discovered a new, revolutionary glitch in the MS version of CC. [2]

While observing the flickering of the screen when holding an arrow key against force floors, Andrew "accidentally" jumped over one of the force floors. He developed a technical explanation for the glitch, rooted from having to explain many of CC's mechanics while annotating for ChipWiki.

According to his findings, if Chip holds against the flow of force floors for 40 seconds he can override the force floor, due to a slight error in timing the fictitious [1/4] move interval carried over from Lynx. This hoax has factual basis, as there are four stages of object movement in Lynx. The slight flickering was proclaimed as evidence that the [1/4] move was so hidden that it was barely visible; AVIs do not record it because they only capture at 10 fps.

The subject of the hoax was Tele-Rooms: according to the rules of the glitch, you could move D and then hold up for 40 seconds, then override the force floor and achieve a score of 310, which is 40 seconds over the current bold; this glitch would also apply for Force Field, changing the face of Chip's Challenge forever.

Andrew made an AVI for Tele-Rooms showing the 310 score, and up until the very end, it appeared completely real; however, on the very last move, it was revealed that he had simply spliced an AVI of an edited level with suction boots available from the first D >6D move. The title of the level was edited to read "April Fools!" 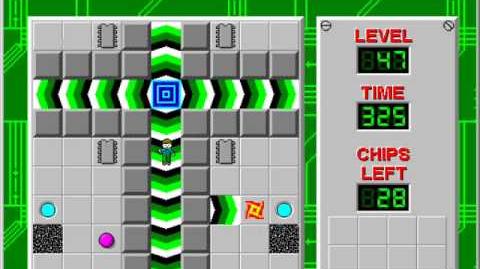 Tyler Sontag responded to the above hoax, and a fake Melinda time report of 443 on Block N Roll by John Lewis, by reporting the Melinda time of 717 on Cake Walk and a new total score of 6 million. In response to a query about an AVI, Tyler posted an AVI of a 716 score.

Finally, a clone block was edited into the level, but with the appearance of a random force floor. A pink ball off screen pressed a red button so a block would clone into the pathway towards the exit. However, the block was only [1] away from the optimum position and the time achieved was 716.4. When Chip exited the level, an annotation revealed the hoax. 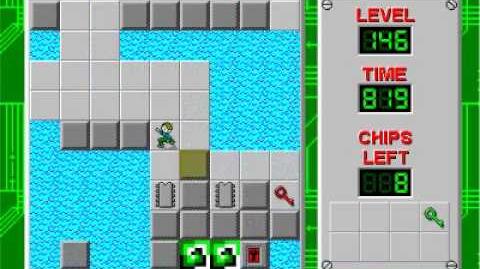