Blobnet is the 23rd level in Chip's Challenge 1, and is on any serious Chipster's list of Most Hated Levels of All Time. The 80 blobs bouncing around randomly within structured squares to collect 88 computer chips among thin tunnels has led to one of the most wrenching, mindless, strategic (or lack of it), and generally outrageous bold time struggles in Chip's Challenge history. Though proper strategy will solve the level easily as long as one can keep a cool head, Blobnet is easily lost, many times over, by impatience or gross errors that would not occur in any other level.

The basic route can be constructed by altering the AVI route to avoid all floor spaces except the chips and eventually the exit. The next step is logic.

Blobnet, despite its huge dependence on luck, can also be played with keen logic and intelligent use of chance, a combination without which 436 might have been impossible. The first piece of strategy is to use even step: Fullsec is a strong recommendation for MS players, since no runs should be wasted.

Many key timesavers require no risk at all. Chip cannot be killed by blobs when collecting chips unless they are next to the chip and Chip takes it on the blob's non-moving turn. There are also frequent situations where Chip can cut across floor such that, if the blob were not there, time would be saved. The focus of Blobnet's strategy is to collect the chips in such a pattern that the risk of walking across these shortcuts is reduced or eliminated.

The eight chips on the edges are the most valuable spaces to pick up a lot of time, since the safe route will use an extra four moves. The goal for such areas is a position such as this:

The blob will move on the next turn. Since it is out of striking range, Chip can safely move L with zero risk, and in the unlucky case that the blob moves D, an alternate route can be planned, or Chip can wait [1] and hope to not get hit, in which case the chip is taken.

Although these are risk-free, there are some situations where taking a small risk at one point can reduce the overall risk entailed by passing through a specific location. Every other 2 moves, when confined in this 2x3 rectangle, a blob will be either on squares 2, 3 or 6, or 1, 4 or 5. The goal is to reach a 1, 4 or 5 situation, but in the case where the blob is at 4 before the chip is collected, this risky situation results:

The best move to make in this situation is DL. Although this runs a 1/4 chance of being killed, 2/3 of the time that Chip survives he will also be able to run straight. The greater danger is that the following will occur when the blob is on its non-moving turn:

Although one risk was dodged, to lose no moves a second risk must now be taken, which is greater than the first. If [1] is wasted again, there is a 1/3 chance that the blob will block Chip completely and another 1/3 that it will move L, which poses a 50:50 risk.

However, in the case where this occurs on the blob’s moving turn, a spring step can be used to foresee the blob’s movement on the next turn without losing any time. In advanced situations, it can also be used to determine the route Chip must take slightly sooner so the player can adapt their strategy quicker.

The aim of this and other strategies, plus these same ideas used in other situations such as:

is to find the balance between waiting and running such that risks are weighed against each other, to get through each sector of the level in such a way that the first two situations are reached most often with the minimum amount of risk, and to know when not to gamble by determining the most likely situation that will result on the next few chips if the gamble succeeds.

The rest is just nerve and a lot of luck, and despite the extensive strategy outlined here, the use of it is sporadic and depends on many different factors, and is never guaranteed to work all the time. The pressure is the hardest part! 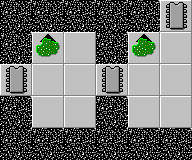 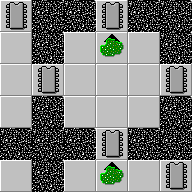 Dear Chip, Sorry about all the green blobs. They came from a genetics experiment that didn't quite go right. I walled off this lab quite some time ago, and wouldn't dream of asking you to go in, except that I left 88 chips there. This level requires patience, good timing, patience, and patience. Patiently, Melinda.

Retrieved from "https://chipschallenge.fandom.com/wiki/Blobnet?oldid=20026"
Community content is available under CC-BY-SA unless otherwise noted.