The Block Donut Rule is a principle of block pushing, concerning the fastest way to get two or more blocks in a chain which points towards their intended path, containing one or more turns, out through to an identical destination.

The simplest situation where the Block Donut Rule is usable is something such as this: 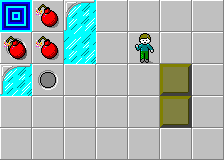 In this situation, both blocks are used to hit the bombs at [1, 0] and [1, 1]. The Block Donut Rule is going around to the right side of the blocks and moving block 2 L, rather than R. The two paths form a donut, which gives the rule its name. While this path is 2 moves longer, it places the block 2 spaces closer to its target, saving four moves, and thus gaining two moves net. Not all situations trade the two moves; sometimes, Chip will already be on the opposite side, and therefore the Block Donut Rule will be worth four extra moves.

However, the Block Donut Rule is not usable in situations where the push physically closer to the target will impede Chip's pathway, or cause the block to be either technically further away from its target or completely unusable. 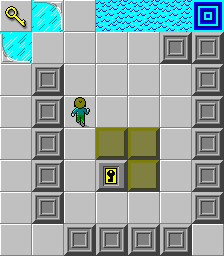 Here, after Chip collects the yellow key and removes the yellow lock, then removes water one, the Block Donut Rule cannot be used, as this would trash block three. Instead, move block three L, block two to water two, and block three out to the water. Note that the rule of double bridges and rule of turning bridges are ineffective with this setup, as this would require a waste of two moves to set up.

One noticable example of the Block Donut Rule in actual play is in the five-block room in the southwest of Mix Up, after three of the blocks have been removed. There is a stack of two blocks in the center of the room, and moving the lower block L rather than R yields an equivalent situation to example one.

Retrieved from "https://chipschallenge.fandom.com/wiki/Block_Donut_Rule?oldid=20033"
Community content is available under CC-BY-SA unless otherwise noted.