The Block Retrace Rule is a common principle of block pushing, used in many situations to minimize the wasted time turning blocks in several directions.

To apply this rule, there must be several blocks usable in close-packed sections, with a single defined source of blocks apparent. Chip's moves behind one block to turn the block away from its current straight-line path should line up with the normal pushing path of another block.

How it is used

When these terms apply, Chip can avoid having to backtrack in both directions, instead using the retraced path back towards the block source to move another block. Typically, it is usable most frequently when blocks move one space at a time in several directions, but it can yield surprising and lucrative results in larger spaces. 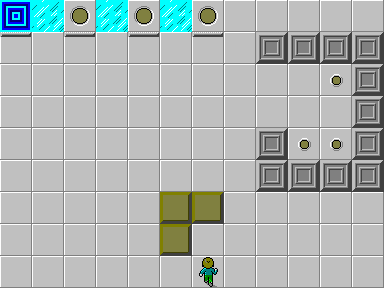 In this small Sokoban level, Chip must move the three blocks to the three brown buttons in order to pass the ice and traps to the exit. Block 2 is directly used on button 3, as it is on the edge of the clone machines. Following this, the rule can be used on the other two buttons. Move block 3 R, following the Block Donut Rule, and push block 1 only 3U 4R, not 3U 4R D. The D move will be accomplished from a more advantageous position, U off the block rather than from L off, when block 3 is moved to button 1.

Note that the above situation is another, more limited case of the rule, as the second button press is retraced in itself. It will use 2 moves in comparison to moving the block 3U 4R D immediately; most cases will not spend any extra moves at all.

Retrieved from "https://chipschallenge.fandom.com/wiki/Block_Retrace_Rule?oldid=20041"
Community content is available under CC-BY-SA unless otherwise noted.