You can find the page you were looking for at:
https://wiki.bitbusters.club/Blocked_Trap.
This wiki is no longer maintained.

Blocked Trap is the 109th level in Chip's Challenge Level Pack 2. Blocked Trap is one of those very hard levels of which the difficulty can easily be seen, even from a level editor, and is the highest Dave Borgman level in CCLP2 with difficulty to match. (Usually, his levels are easier.) This is a trait of all 5-rated levels, and pushes Blocked Trap just over the top.

In order to complete it, Chip must find the hidden buttons to the glider clone machines, then the remaining hidden yellow keys, the safe way through the yellow locks, and then how to get the tanks out of the corner. Fortunately, there are multiple ways to perform this section of the level.

The simplest route, worth 565, uses two blocks to redirect some of the cloned gliders into the blue button and then traps them in that corridor, which does a lot of the work for Chip. Escape the starting slalom, then move the caught block between the rows of red buttons and clone blocks, thus revealing three of the four hidden buttons; press buttons 2 and 3 before moving the block R 5U. Now, play the other block created 5L 5U 2R, then R behind the sliding glider, and as the two gliders move northeast, shove it R again to permanently trap them.

Follow the path over the force floors, then off the two ice spaces, and south over four hidden keys. Continue (LU) ULURUL (2L), up between the blocked sides of the ice corners for the suction boots, and then 2L and north through the safe yellow locks. All remaining locks have traps under them.

The bold route of 567 is slightly more complex; move the first cloned block only 3L, then walk D (R [1/2] R) to clone some additional gliders while waiting for the others to clear away. The second block will then trap three gliders on the blue button, which switches the tanks a lot faster, so a different route to the exit is required. Remove both dirt 1 and 2 immediately, then hide under dirt 3 and remove it after the tanks switch three times. The tanks chomp inwards on the gap towards the exit, but not quite quick enough to stop Chip. 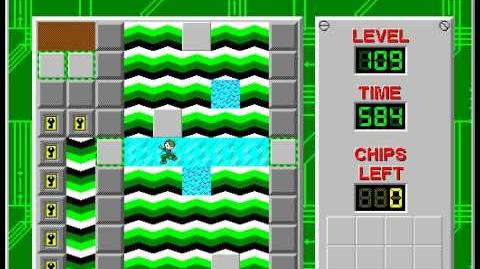 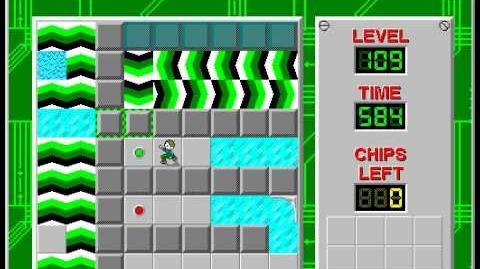 You can find the page you were looking for at:
https://wiki.bitbusters.club/Blocked_Trap.
This wiki is no longer maintained.