Boosting is a technique used fully in the MS ruleset of Chip's Challenge, but seen in a less extensive form in Lynx. When Chip steps from any sliding tile to a non-sliding tile, he is allowed to make a move instantaneously without waiting to come to a stop. Since the slide is an involuntary move, it is not limited by Chip's maximum running speed of 5 m/s.

Lynx to MS changes, and busts

The original version of boosting in Lynx did not include this instantaneous move, such that Chip had to slow down to 5 m/s before proceeding. The only overriding allowed in Lynx is in all directions except directly opposite the force floor, and only when previously sliding on another force floor. The MS rules for boosting are effectively caused by a glitch.

Levels such as Three Doors, Traffic Cop, Hidden Danger, and Scoundrel are busted because they were not changed to fit the new rules, and Floorgasborg is also affected mildly because the suction boots are not required. 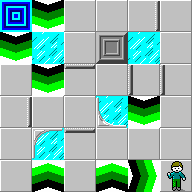 The clone machine blocks off the right edge of the grid. The correct route moves to the southwest, where there is an encounter between the ice and the force floors. If Chip were to move 2U L, since the L move was voluntary, he can't override the force floor. In order to get past it, Chip has to use the ice at [3, 3]. The full route is U 4L >D L 3U 2R URD >R 2U 2L, and then a choice between L >2D U, overriding [1, 2] with the use of the ice, and L to the exit, or step DL >L and override U. The second path is [1/2] quicker, but either way will use 2 turns for the purposes of the timer. The total time taken to reach the exit is 3.4 seconds.

Boosting as a last resort

In addition to helping solve a level faster, there are some situations where boosting may be required to solve a level, such as in this diagram: 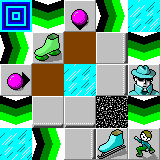 As the pink balls cannot move in their current positions, they will move when they are freed, in this case when the dirt is removed. Only Chip can remove dirt, but if he simply steps on the dirt, the ball will squash him as monsters move first. If Chip could slide onto one of the dirt spaces, he could then move instantaneously to the suction boots and then to the exit, but as it is, Chip must collect the ice skates, and there are no other sliding tiles for Chip to use. Fortunately, there is a thief to the right side; Chip must move L 4U D to reach him. Now, Chip can slide L or U across the ice and then clamp to the exit.

This motif is common in several custom level sets, as many designers specialize in unusual solutions to simple problems. One example of this device is the ending section to this level created by Andrew Bennett, who is known for such devices: 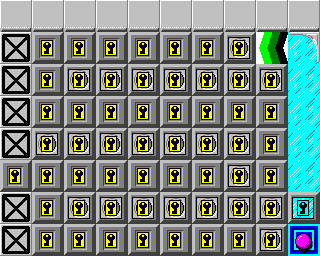 All the buried tiles under yellow locks are traps except for [8, 6] and [8, 7], which are recessed walls. When Chip reaches this section with 30 yellow keys, he can move to the trap at [7, 0] since it is connected and buried (although holding it down costs no time). Before Chip can proceed, he needs suction boots from behind the socket, but must also find a thief to remove the ice skates that the player was forced to pick up at the start of the level. Otherwise, opening the blue lock will cause the pink ball to kill Chip. When the boosting works properly, Chip can avoid the ball and exit.

After a boost is taken, the next move by Chip will sometimes take an entire turn and sometimes only a half turn. The reason this works faster is because Chip can only make voluntary moves every 1/5 of a second. When Chip lands after sliding an odd number of tiles, it takes a multiple of 1/5 of a second for the move to be complete and 1/10 of a second for the boost to be made. Since Chip can then legally make another voluntary move in 1/10 of a second, he can cover two spaces in one turn.

Because of its effective kinship to the spring step, this behavior is known as the spring slide.

Retrieved from "https://chipschallenge.fandom.com/wiki/Boosting?oldid=20071"
Community content is available under CC-BY-SA unless otherwise noted.