You can find the page you were looking for at:
https://wiki.bitbusters.club/Bounce_City.
This wiki is no longer maintained.

Follow immediately to the right, then wait about three seconds for the balls to clear; though there is a faster route through these, the time is still lost later in the level and the added difficulty of reaching that point on time is much less than the difficulty of this, which involves dodging monsters. Jaunt northwest and through the paramecia, then wait for the pink ball elevator and jump into the bottom alcove; carefully sneak out and barely dodge into the next one at the bottom, then move to [30, 1] - often the furthest reachable square northeast in CC1.

This section is challenging to record and can be unusually tricky to pass without losing any time, as the wall tiles and horizontally shifted balls make collecting the keys more than a simple repetitive interchange of [2] waits and vertical moves. The first ten encounters with balls are somewhat flexible, as some [1] waits can be moved from one place to another, and careful testing will show that one route is a pattern of waits at these ten locations: 1-2-2-1-2-1-0-1-2-0. In addition to casual or competitive play, patterns of waiting are valuable tools for advanced AVI recording and are officially sponsored by the ChipWiki channel.

If this area is finished in this manner, there should be [4] left to wait for the second elevator, though [5] will still be safe; anything more than this and Chip will have to use the top alcove instead. Negotiate the two bottom alcoves to return to the blue lock and take two more keys, then open the yellow lock on the right to progress further and replace the key. A paramecium is visible; follow its path down to three locks and exit. 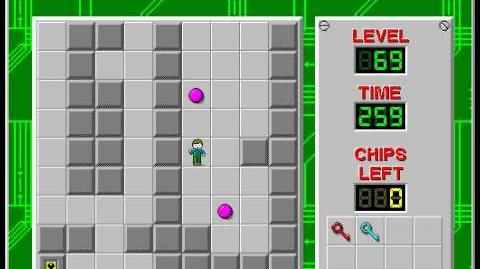 You can find the page you were looking for at:
https://wiki.bitbusters.club/Bounce_City.
This wiki is no longer maintained.