You can find the page you were looking for at:
https://wiki.bitbusters.club/Bug.
This wiki is no longer maintained.

A bug, often known as a bee and called an ant in Chip's Challenge 2, is a monster in Chip's Challenge. It always stays to the left when it moves, so if there is no wall to the left of it, it will turn left. If there is no wall within its vicinity, it will resort to continually turning clockwise in a 2-by-2 square until a wall appears to the left of it. It will die in water and avoids fire. Strangely, in CC2, ants will avoid canopies.

The following diagram illustrates these properties: 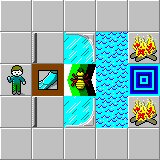 Because this is the bug's first move, it will not be affected by the force floor, and will step U onto the ice space. Meanwhile, if Chip steps on the dirt, the flippers will keep him from being killed. If Chip waits to collect the flippers, the bug will circle across the northwest and then continue circling around this thin wall if the flippers are then removed. Should they still remain untouched, the bug will circle around the southwest. If the bug were left to go back to the force floor before Chip removed the flippers, the level would become unsolvable as Chip could not collect the flippers safely. In Lynx, this level is both unsolvable and unplayable because the bug would already be stuck on its first turn and the flippers are under the dirt.

The quickest route through the level is 2R DR, and using boosting techniques, 2R just ahead of the bug into the exit. The bug, in this situation, would continue to move DR, be slid back to [1, 1], and then move DR and slide back without cessation.

One further important gameplay situation which pertains to the bug is the Controller and Boss Glitch.

Retrieved from "https://chipschallenge.fandom.com/wiki/Bug?oldid=20088"
Community content is available under CC-BY-SA unless otherwise noted.