View source
watch 01:36
We're Getting Mutants in the MCU - The Loop
Do you like this video?
Play Sound

The Button Smash Glitch is a rather little-known glitch in the MS ruleset of Chip's Challenge, which applies to blocks that are flicked onto buttons (whether or not the Mouse Panel Glitch is used).

All buttons are activated when they are pressed, that is, at the instant the button is moved into the lower layer due to an object moving over the button. There is also another condition that must be met in order for the button press to be registered: Chip's Challenge must receive a notification that the object has moved onto that square. Chip's Challenge is unable to detect the object moving onto this square, such that no press is read.

The use of the Button Smash Glitch is required to solve this small level: 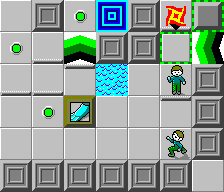 Per the rules of multiple Chip tiles, the one facing west moves. Only two green buttons can be touched before the other Chip will be killed quickly by the fireball. If Chip moves the block L to avoid the water space, he has used one, and cannot reach the exit without touching another two. The secret is to let the button in front of the exit be the second button pressed; the only way to do this is to move the block U 2L, with the help of the flippers collected from under the block, then flick it -U onto the green button. Note that clicking *UR-U will result in Chip moving onto the button at [1, 3]. Now, Chip moves the block U for one press, then runs 2R >U onto the second press. Now, the other Chip will die next move, but fortunately because of the boosting associated with the force floor, Chip can reach the exit before the fireball reaches the other Chip.

This glitch, as of now, has not been exploited in any official level sets, because it can arise only when there is a possibility of the Mouse Panel Glitch, which itself turns up on very few levels.

Brown buttons behave slightly differently from the other types of buttons. If there is already an object on its corresponding trap, the object will not be released when the brown button is smashed. However, if an object moves onto that trap on any following turn, the trap will then realize that its button is indeed pressed and will let the object pass.

This coding also affects how brown button presses are read: brown buttons on the lower layer at the start of the level, regardless of the tile on top of them, are considered pressed.