The scoring in Chip's Challenge is simple, depending on how many times Chip was killed and how much of the time limit remains. Scoring occurs only when Chip reaches the exit, and is totaled in this manner: 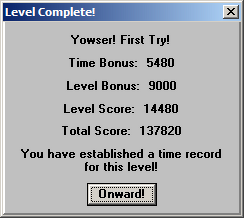 The window's title is always "Level Complete!", and the leading message can be any of four depending on how many attempts it took Chip to complete the level:

The level bonus, seen as the third value, is the level number times 500, multiplied further by .8 per death, and the score is then rounded down at .5 or lower to the nearest point. Should this total decrease below 500, it will stop decreasing. Since this level was completed on the first try, Chip scored 9,000 points, and was therefore playing level 18 in this set.

The level score, value four, is these two addends summed together.

The total score, value five, is Chip's full score in the game at this point, as calculated by Melinda.

Below the total score is a place for a message that declares any score improvement. If there is no improvement, no message is shown. The shown message, stating "You have established a time record for this level!", will be shown whenever a level is completed for the first time. A time improvement will elicit the message "You beat the previous time record by X seconds!", and an improvement in the level bonus will elicit the message "You increased your score on this level by X points!" If both of these happen at the same time, the former message is shown.

Theoretically, the lowest score Chip can achieve is 67,554, scored by recording a time of 1 on every timed level and being killed repeatedly until the level bonus drops under 500. However, in practical play, this is not possible, as Chip assuredly will not survive Jumping Swarm for 399 seconds; Slo Mo may also not be possible to complete with a time of 1.

Aside from the regular scoring, two unofficial competitions are generally held: T-Chip times and tenths reduction.

The T-Chip times are simply scores that would be achieved if 999 were the time limit to an untimed level, and although the scores themselves do not count officially, their AVI solutions are official bold solutions and are used in this guide. Tile World automatically keeps this time as it would any other time, although it is difficult to keep track of because the time limit is never shown.

Tenths reduction is used to compare times that otherwise would have the same score, since normally the in-game clock only ticks down one second every five moves (allowing a faster solution to fail to beat a slower solution's score). The tenth (referring to tenths of a second) is the most basic unit of time in Chip's Challenge; normal moving uses two tenths per tile, or one fifth, sliding uses one tenth per tile, and boosting in a perpendicular direction uses one tenth every two tiles. Arising from this, many routes are done as quickly as possible, with the fewest tenths remaining. Official terminology for tenths is either .X or -.X, which signifies the amount of seconds left either until the next tick or since the previous one.

The Public TWS always uses the -.X notation, and because of its popularity and ease of use, it is generally fully optimized. Exceptions are few: difficult and/or unlikely routes through random levels, or in the case of some very harsh examples, because it was originally performed in MS and nobody has achieved it in Tile World. The AVI archives are generally not so well-kept, but they have received a major refurbishing by Andrew Bennett to match up with the TWS solutions.