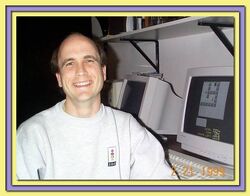 Chuck Sommerville is the original creator of Chip's Challenge, as well as the designer of many CC1 levels. He is credited for the 8 lesson levels, as well as On the Rocks.

He also created a sequel, Chip's Challenge 2, but was unreleased for years due to copyright issues. For this reason, CCLP2 was created as an unofficial replacement. Meanwhile, Chuck took a leaf out of Brian Raiter's book and is developing the Tile World equivalent to the original CC2: Puzzle Studio. Like Tile World, as this uses different coding and graphics than the original, it will be a legal copy. However, CC2 was released on May 28, 2015.

Puzzle Studio has been in development for several years, and a Yahoo! group and a part of CCZone are formed around the development of Puzzle Studio. Chuck is currently active on both boards, allowing him to stay ahead of fan suggestions, additions, and assistance.

Information on the mechanics of Puzzle Studio can be found on the main page.

Retrieved from "https://chipschallenge.fandom.com/wiki/Chuck_Sommerville?oldid=20336"
Community content is available under CC-BY-SA unless otherwise noted.