The Convergence Glitch is an odd glitch in MS Chip's Challenge which occurs when Chip and a cloned block, as a direct and immediate result of Chip's move, exit the same teleport at the same time. 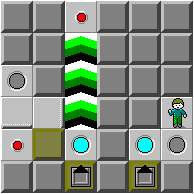 In this diagram from a TCCLP level, when Chip enters the teleport, he pushes a block which touches the red button to the clone block at coordinate [4, 5] in this selection. This block will enter the first teleport and move north out of the second while Chip is in it. During this time period, Chip will appear on top of the block, rather than being killed by the block.

The result of this is that the teleport is erased, according to transparency rules, and the block turns into a Chip tile, facing in the direction it was just moving, and continues its movement out of the teleport, in this case sliding towards the red button which will annihilate Chip if he does not move. Meanwhile, the real Chip is left on the teleport's square, but can still perform boosting off the tile.

The properties of the new Chip

When this Chip appears, it will combine the properties of a block and Chip: it will explode a bomb or removing water like any other block, the real Chip will die if hit by it, and it responds to other tiles like a block. It will respond like Chip to monster impacts, meaning Chip dies as normal. However, Chip cannot move the block-Chip. This will cause Chip to be unable to reach the square that the block-Chip eventually lands on, even if he were to land on the exit. The exit will thus appear as Chip in the exit, but the exit will not take effect, possibly causing the level to be unsolvable.

Retrieved from "https://chipschallenge.fandom.com/wiki/Convergence_Glitch?oldid=20225"
Community content is available under CC-BY-SA unless otherwise noted.