Cypher II is the 34th level in Chip's Challenge Level Pack 2. It was designed by Dale Bryan and Sarah Canale specifically for CCLP2, as the original version of the level was significantly different. It is obviously named after the original Cypher, and there is a cypher in Cypher 2 as well.

However, that cypher is harder to determine, less useful, and the level that contains it is flat-out hard. In fact, a level editor or AVI is probably going to be necessary to do it. Fortunately, one is provided below; however, the bigger clue is that when complete, the four sections of Cypher II contain four letters: 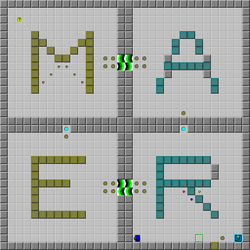 which spell out a password that will allow the player to go directly to level 145, Gauntlet.

Retrieved from "https://chipschallenge.fandom.com/wiki/Cypher_II?oldid=20247"
Community content is available under CC-BY-SA unless otherwise noted.