You can find the page you were looking for at:
https://wiki.bitbusters.club/Dancing_Gliders.
This wiki is no longer maintained.

Dancing Gliders is the seventh level in Chip's Challenge Level Pack 3. It was created by Rolf Redford, and shows some design references to previous levels: the climbing computer chip ladders and the jump between sliding gliders to collect a boot are the two obvious examples, originally seen in Dangers of Fire and Beasts.

Push the block straight west and into the water behind the gliders to take the suction boots, then wait [1] and jump out, and use this block to begin the bridge to the keys. (Although Chip can wait only [1/2] and escape the glider room, more waiting is needed later, and half-moves are tricky to drop.)

Run to the east, and before using the remaining block, dig south and release the bug from its prison. With both keys, open both locks and clear out the remaining chips, then release the paramecium into the yellow lock room; meanwhile, the bug has entered the red lock room, and both monsters release the traps by the exit. 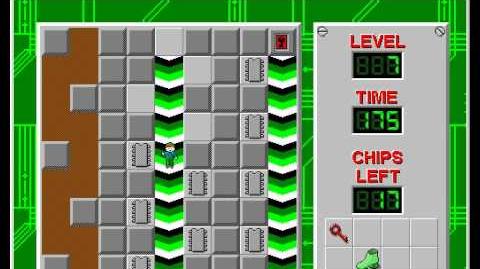 You can find the page you were looking for at:
https://wiki.bitbusters.club/Dancing_Gliders.
This wiki is no longer maintained.