Dangers of Fire and Beasts


You can find the page you were looking for at:
https://wiki.bitbusters.club/Dangers_of_Fire_and_Beasts.
This wiki is no longer maintained.

Dangers of Fire and Beasts is the 55th level in Chip's Challenge Level Pack 2. It was designed by Rolf Redford, who describes it as a randomly assorted collage of small monster and fire tangles which turned into a level, which accurately demonstrates the dangers of these items.

Move to the section below and take all the chips on the right; touch only red button 6 for the easier, simpler 77 route. This will clone a block which opens the toggle walls at the start, while the other block clones will clone teeth. Retreat upwards with the chips on the left, then the freed ones at the very start, and now move to the far west and collect the chips and fire boots from the sliding gliders.

In the third section to the south are some useful items, and also two blocks that allow Chip to reach the second section, used correctly. Move D onto the third slalom, then LD 2L RU and move block 1 outwards to 2U off the blue lock, which will allow Chip to use the block in this section. At the bottom is a brown button that releases the trap in the second section; before you hold it down, wipe out the three chips at the very bottom. Now, go collect the other block and push it over the water space, allowing Chip to enter the second area.

Move D off the fire, then collect the remaining five chips and pass the socket, which leads to another red button. At the time it is pressed in the AVI, or with any even number of moves short, the red button will clone the blocks when the gliders aren't on the spaces, allowing Chip to get into the exit.

The 78 requires luck relating to the Controller and Boss Glitch, and is more complex to execute. Starting from odd step, touch buttons 1, 3 and 6, then pick up the fire chips and move 4D [1], then all the way west. Chip saves [3], but must keep at least [2] of it while dealing with two cloned teeth.

This time, when collecting the fire boots, Chip must wait [1/2] for a sliding glider to pass, but the loss of a 2D spring slide does not drop [1]; since Chip is down [1/2] after >L D, he can use a spring step for the next 2D. By the time Chip has moved 3D, both routes are back in sync.

Hide R away from the trap after ducking under the teeth, which will catch one teeth in the trap; [1] will be lost to the other teeth when bringing block 1 out. The currently trapped teeth will move D out of the trap, which is then controlled by the other teeth which is facing south; the luck comes in when the brown button is held down.

The controller, at this time, is the walker originally at [9, 11]; it must move D on the same turn the teeth moves out of the trap in order to cause it to drown. In most other cases, the teeth chases after Chip in the corridor; in some rare cases, Chip can still succeed after the teeth has moved UD or RL, depending on how high Chip has climbed the computer chip ladder. The remaining route is identical to the 77.

The gliders guarding the exit die on fire spaces in MS, but because this does not happen in Lynx, Dangers of Fire and Beasts cannot be solved there. Swap the gliders and fire for fireballs and water to make the level possible. (Note that Chip is able to boost over the force floor at [8, 24] even in Lynx, because he was propelled out of another force floor before sliding on the ice.). 77 will be the highest score possible because there is no Controller and Boss Glitch in Lynx. 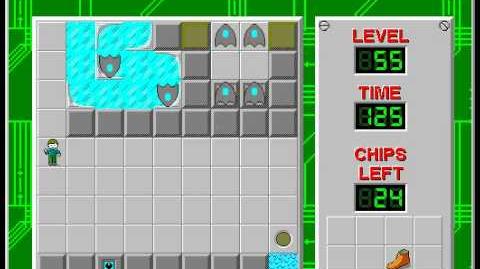 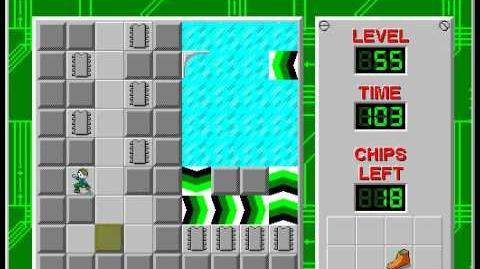 You can find the page you were looking for at:
https://wiki.bitbusters.club/Dangers_of_Fire_and_Beasts.
This wiki is no longer maintained.