In extreme cases such as Monster Lab or Lead Us Not into Temptation, a temporary AVI solution is used as the official solution until it can be scored with the real level; as derandomization was not developed until after CCLP2, such measures have only been utilized for the rare CCLP3 levels with random elements.

There are two types of derandomization, depending on the nature of the random elements. For random force floors, they are typically replaced with other sliding tiles which still allow the same boosting overrides. Often ice is put ahead of each force floor, but sometimes force floors against each other are also used. One historical example is Mads' Rush II: 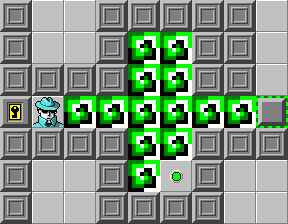 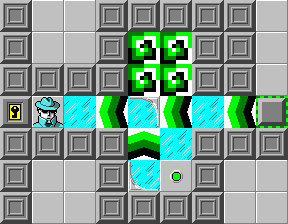 When walkers or blobs interfere instead, it can often be easier to derandomize. Frequently, the solution would be to simply remove the offending monsters, as one might do for Oorto Geld II:

Here, the walkers control nothing in the level unless they run into the center (very unlikely), and destroying them would make determining the Melinda time much easier. It was eventually found to be 671, but derandomization might have made it simpler to write the route.

Retrieved from "https://chipschallenge.fandom.com/wiki/Derandomization?oldid=20267"
Community content is available under CC-BY-SA unless otherwise noted.