A dummy level is an intentionally unsolvable final level in a custom level set to prevent the Termination Glitch. Levelsets ending in with 144 or 149 will end with the normal ending sequence, but if they end on any other, the glitch ends the session as Chip's Challenge was always designed to end at these two levels. To avoid this, a dummy level prevents the player from completing the last level. The term is believed to have been invented by Drew Thomas, who ended his levelset with this small, unsolvable level: 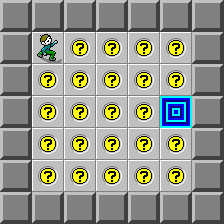 The name of this, simply Dummy, stuck ever since.

Usually, a dummy level is small, with a time limit that is too small to complete the level assuming the Long First Second Glitch does not occur, which includes Dummy (limit 1) and The Unsolvable Last Level. Other levels play out normally, but at the very end, the exit may be unreachable or simply missing, usually with a hint stating that this is the end of the levelset. A third type of dummy level is where Chip is trapped and cannot move, either within one tile or any other small amount. A de facto type of dummy level is a theoretically solvable level, such as pi.dat's the end of all time, or TCCLP2's GADZOOKS; these are possible, but not within the lifetime of Earth.

Retrieved from "https://chipschallenge.fandom.com/wiki/Dummy_level?oldid=20302"
Community content is available under CC-BY-SA unless otherwise noted.