You can find the page you were looking for at:
https://wiki.bitbusters.club/Gauntlet.
This wiki is no longer maintained.

Gauntlet is the 145th level in Chip's Challenge Level Pack 2. It is one of the Secret levels in CCLP2. Unlike Thanks to... in CC1, Gauntlet was put into CCLP2 as an actual level, rather than a Credits level. It was made by Dale Bryan. The MAER password is the only one collectable from Cypher II, but unlike Cake Walk from the original set, Gauntlet is a simple level because there isn't much of a choice of paths. The bold time, however, requires significant luck, and odd step is also required.

Move the block and wait [2] for the paramecium chain, then slide through the teleport and follow the path to the gravel. Step on the teeth row, then dodge back up R 2U [5] and sneak past another teeth to five chips and fire boots. On this and the next area with flippers, move (3R 2D) from the boot and escape; in the final teeth area, Chip doesn't need the suction boots, so simply backtrack, just escaping the marching teeth.

Hit the blue button to sneak past the pink ball, then touch the other blue button and then the green button, and sneak through the blobs for the first bit of luck. Touch the force floor and the top red button three times, waiting [1] before the third, and walk 3R [2] RD. During this time, Chip has to get the walkers to make six correct 50:50 choices; (1/2)^6 = 1/64, and with two other luck-dependent areas and 37 seconds of play in front of any of them, this bold can take a long time to achieve.

A simpler method of completing Gauntlet involve the use of the block at coordinate [18, 25] (the clone block in this room will clone on top of Chip) as a substitute for one of the deflected walkers, which drops the time slightly to 456: clone the top walker, wait [1] and clone the second, then move the block 2R (to avoid walker 2 moving (3R) U into Chip) D 3R to fill in the hole left should the top walker move 3R 3D R.

The chance of this working is 1/2 * 1/3 = 1/6; walker 1 cannot move 3R 4D because it is ahead in the monster order and must choose before walker 2. There is a chance that the bottom walker may move 3R 4U D or (3R) 3R, which would force a wait of [1] in the first case and require it only half the time in the second. However, Chip has several moves to spare.

Whichever route has been used, walk through the open bombs, over the socket and onto the trap, and with the 458 route, one of the blobs has to be holding down either brown button 1 or 6, as seen in the blob room, for Chip to exit at 458.

Above and below the third "gauntlet", gliders and fireballs are cloned towards fire and water, and die at the end of the road. Because the gliders survive in Lynx, they back up and swell the area to overflowing, making Gauntlet impossible. 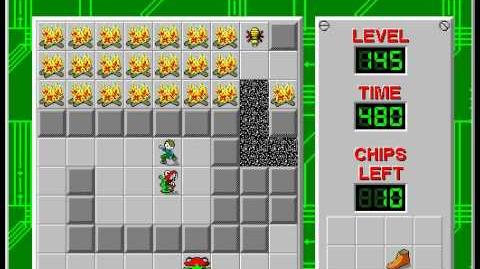 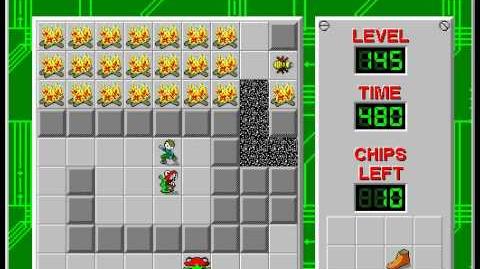 You can find the page you were looking for at:
https://wiki.bitbusters.club/Gauntlet.
This wiki is no longer maintained.