You can find the page you were looking for at:
https://wiki.bitbusters.club/Nuts_and_Bolts.
This wiki is no longer maintained.

Nuts and Bolts is the ninth level in Chip's Challenge 1, and is usually considered to be the first true level of the game. It is significantly harder than the previous eight levels, due to the combination of everything learned so far, and some markedly harder sections. All eight training levels are represented at least once.

After collecting the yellow key at the start, the optimum route is to hold down the R key after entering the yellow lock, as this will cause Chip to hit the only fake blue wall in the panel. However, do not hold the key down too long, else block 3 will be pushed R, making the next section take longer. After boosting over the ice, hit the green button twice (boosting off the force floor), which will allow Chip to collect the blue key and enter the blue lock without waiting. After exchanging the keys, it is necessary to wait [1/2] (although [1] is simpler and costs nothing) to avoid colliding with a fireball on the ice. After the ice slide, collect the upper chip (as this is the one that the bugs are away from), then the chip surrounded by blue walls (the south one is the only fake). Now go down to the room below the bug room - this contains a Sokoban puzzle with 4 blocks that are used to explode a row of 4 bombs, leading to the chips (including one under a block). Collect the last chip from the bug room, then go through the socket.

The level ends with a fireball stuck on a trap that blocks the exit out. If Chip steps on the brown button, he won't be able to get over himself. The solution, hinted at by Melinda's final sentence of her Special dispatch, is to cover the button with the given block, which releases the fireball and gets Chip over the trap.

Dear Chip, In order to outsmart the spies, I built a secret wall panel, but I can't remember where I put it. I also added a lot of anti-spy bombs. If you come across any, detonate them with blocks. Blocks are also great for holding open bear traps. Sincerely, Melinda. 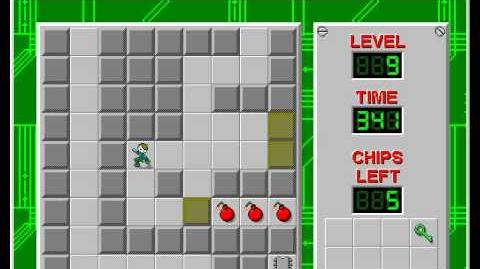 You can find the page you were looking for at:
https://wiki.bitbusters.club/Nuts_and_Bolts.
This wiki is no longer maintained.