You can find the page you were looking for at:
https://wiki.bitbusters.club/Planet_of_the_Teeth.
This wiki is no longer maintained.

Planet of the Teeth is the 56th level in Chip's Challenge Level Pack 2. It was designed by Dave Borgman. This level may be busted, or it could have been intentional; the two keys are not required due to boosting overrides. Use even step with the specific route shown.

Take the chip on the right, then move 5L 3D L, collect the seven chips on the top of the lower edge, then run to the left by collecting the rest of them, and run up to the teleport. Slide >R DU to collect a key chip by using a special shortcut, then run northwest to steal the final chip from a fireball. The exit is back in the center of this room. 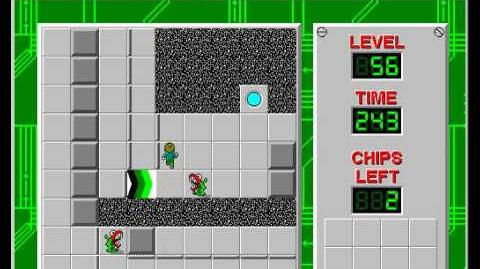 You can find the page you were looking for at:
https://wiki.bitbusters.club/Planet_of_the_Teeth.
This wiki is no longer maintained.

Retrieved from "https://chipschallenge.fandom.com/wiki/Planet_of_the_Teeth?oldid=20516"
Community content is available under CC-BY-SA unless otherwise noted.