You can find the page you were looking for at:
https://wiki.bitbusters.club/Problems.
This wiki is no longer maintained.

Problems is the 49th level in Chip's Challenge 1. This level would be a significantly tough challenge were it not for the Controller and Boss Glitch, which causes the paramecium to never escape the trap it falls into after releasing the first wave of pink balls, and thus the second wave on the bottom never gets released. The controller in this level is the ball at the very bottom of the level, grid coordinate [1, 30], which only moves horizontally; since the horizontal exits from the trap are blocked, the paramecium won't escape. In fact, it makes no difference which pink ball is the controller; none of them move vertically.

Therefore, the only thing that poses any difficulty at all is picking up the keys and computer chips; however, Chip has a limited amount of time to perform the former because the released pink balls will soon sweep the entire northern area. Although Chip can stay safe in the red lock corridor, most of the red keys will hereafter become much harder to collect safely if not collected, with only the very northern ball's deviance allowing Chip to take them at all. 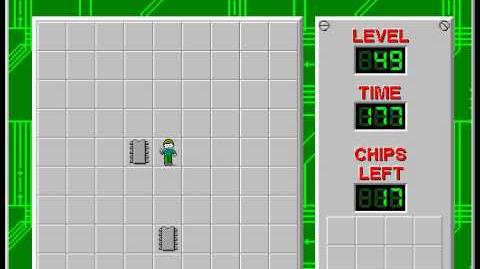 You can find the page you were looking for at:
https://wiki.bitbusters.club/Problems.
This wiki is no longer maintained.