You can find the page you were looking for at:
https://wiki.bitbusters.club/Pyramid.
This wiki is no longer maintained.

Pyramid is the 104th level in Chip's Challenge Level Pack 2. The hint, inescapable from when read, says that one of the two buttons has to be hit twice; this is the blue button.

The pyramid that contains the chips is a tough section; some teeth move and some don't, and the route through is difficult to figure out. To do this, walk along the right edge to the green button, then 2:[3L 3U] and 3L UL to the yellow key, and now down four chips, left four chips, and now touch the blue button twice.

Walk out of the pyramid, which collects the remaining chips, and move through the toggle walls and push the block. In order to collect the bold, Chip must move into the across toggle walls exactly as they are switched by the block; this timing is hard on its own, as Chip has to wait [7 1/2]. A trivially easy solution is to wait [7] to begin with, then resist the force floors once, which is an easy way to elicit a [1/2] wait. Now, Chip can fiddle with the buttons through the corridor and take the red key.

Now, open the yellow lock and wend your way to the blue key on top, open both of the remaining locks, and touch the brown button in the center from the right side. The pink ball will release Chip into the exit.

The Lynx ruleset does not read non-moving monsters and simply makes them move instead, which causes Pyramid to be impossible as Chip can never get in the pyramid. For Lynx play, replace the non-moving teeth with locks of any color except yellow, since this also locks the blocks. 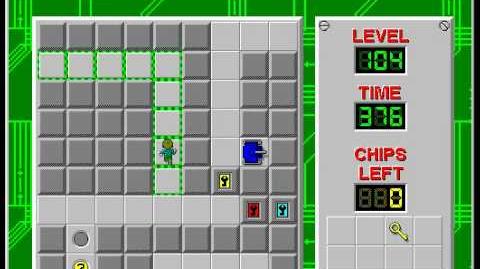 You can find the page you were looking for at:
https://wiki.bitbusters.club/Pyramid.
This wiki is no longer maintained.