This article is about a set of tiles that behave randomly. For the level theme based on the uses of these tiles, see Random-element.

A random element is a tile in Chip's Challenge in which its behavior is determined randomly. Random elements often make it very challenging to achieve the bold time on levels that contain them: the bold on Catacombs has a mere 9/4096 or 1/455.11 chance of being scored, 26 on Mads' Rush II is a mere 1/512 shot, and Lot of Danger's Melinda time is a 1/2096 chance.

There are two monsters that move randomly: blobs randomly choose an adjacent legal space to move onto and walkers randomly choose which direction to turn when they collide with an acting wall. Since they cannot choose a direction that is blocked, some solutions changed from Lynx to MS: the Spirals corruption is one of the most famous.

In Lynx, the sequence of possible directional changes for walkers is determined before the level begins and will always remain the same for any attempt at the level. Blobs work as in MS.

The Lynx emulation does not check if a monster's intended move is legal until the move has been chosen, which means either monster can fail to move by choosing a blocked direction. However, as per Lynx rules, the monsters will attempt another move 1/20 of a second after their failed move, so they will likely not stay still for very long. Nevertheless, some obstacles may be passable in Lynx, but not in MS, such as this: 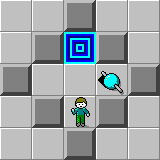 To solve this small level using Lynx rules, Chip must move 2U on any turn the walker moves away from [2, 2] to reach the exit, assuming that the walker tries and fails to move L, U or D. The chance of solving this level in one attempt is 3/4; although the entire sequence of the walker's movement is predestined, Chip can choose to pass at any specific time.

There is only one tile which has random behavior, which is the random force floor. When anything but a monster in MS, which treats a random force floor as acting wall, enters this tile, it will affect the object just like normal force floors - meaning it can send it into an acting wall or be overrode by suction boots - except that the direction chosen is random.

Random force floors are monster-acting walls in MS only. In Lynx, they are not random at all, instead cycling through the four directions clockwise, beginning from east. All random force floors in the entire current session - not just the current attempt - follow this sequence.

Retrieved from "https://chipschallenge.fandom.com/wiki/Random_element?oldid=13758"
Community content is available under CC-BY-SA unless otherwise noted.