You can find the page you were looking for at:
https://wiki.bitbusters.club/Smorgasbord.
This wiki is no longer maintained.

Smorgasbord is the 50th level in Chip's Challenge Level Pack 2. It was designed by Anders Pemer, although it is usually credited to Christian Ståhl; Christian himself corrected this. (The other Anders Pemer level is Tutti-Frutti.) This level is so named due to the large itemswapper section, or "smorgasbord", that Chip must cycle through in order to collect one of the level's chips. While it is long, it does not have any specifically hard puzzles to complete; the teeth in the maze, however, is hard to optimize to a time. Use odd step for this route, to simplify some later movements.

Using odd step, wait [3], then follow the path to three blocks and use 2, 3 and 1 to collect the flippers and the chip. Slide over the ice, then move onto the far left force floor dive and collect the suction boots, ice skates and flippers, and then the chip below. Next through here is the itemswapper section: walk to the ice skates at the far north edge, and then follow the order of green key, flippers, blue key, fire boots, red key, green button, suction boots, yellow key, and finally the chip.

With no further need for the boots, play past the next thief and collect a chip, then push the block L to collect new flippers. Jump into the teleport, then continue along and slide >R into a pool to pick up a chip and another pair of ice skates underneath. At this point, with perfect boosting in the two sections where it has been used, plus odd step, the following route should be taken. If moves have been lost, drop [1] if the number is odd up to the point of four moves lost.

Continue go all the way to the very center, picking up several chips, and then a third set of flippers. Use this to collect the one chip left behind before returning to the exit. In CCLP2, the Decade Messages still appear like in CC1, although they are exactly the same. Although Smorgasbord does quite well with Digdirt's message, a level like Time Bomb is not close to Totally Unfair as described by Ice Cube/Frozen Birdbath. 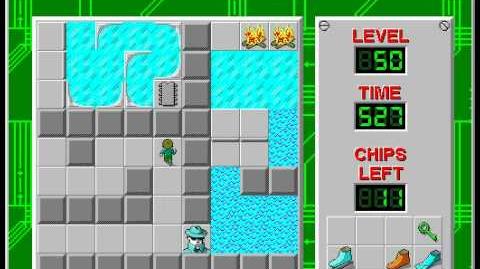 You can find the page you were looking for at:
https://wiki.bitbusters.club/Smorgasbord.
This wiki is no longer maintained.