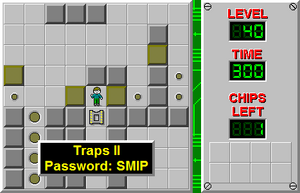 A Sokoban level, alternately referred to as a Pocoman level, is a term used to identify a level falling under this specific type of level theme: the movement of blocks onto specific squares to either remove water, bombs, hold down traps, or for some other objective. A Sokoban/Pocoman section means that part of the level holds this property.

The shown level, Traps II, is an example; Chip must move the nine blocks onto the nine brown buttons in order to reach the chip behind the traps. Traps I has a similar section at the beginning of the level, but there is more level beyond the socket.

Sokoban and Pocoman are two games that work the same way as these levels: the character must move objects onto squares, and then finishes the level when this is done. Therefore, the two terms are often used interchangeably. However, in particular, Chips on the Blocks's first section is a direct copy of Pocoman's first level, which means it is usually called by that name.

Crazy and Crazy II are notable examples of Sokoban levels in Chip's Challenge 2.

An additional, less formal reference to a Sokoban level is a block pushing level, so principles of block pushing are frequently used. To solve Sokoban levels quicker, apply the rule of double bridges, rule of turning bridges, Block Donut Rule and Block Retrace Rule at any opportunity.