A spring slide is an advanced technique in Chip's Challenge related to the spring step, but involving moves after leaving sliding tiles.

Voluntary moves of Chip and any 5-m/s monsters can only happen once per turn. There are two different types of spring slides, both with the result that the second voluntary move after sliding can occur only [1/2] later than the first voluntary move, rather than [1] as normal, even though they both occur within one turn each (just as a spring step does).

There are four ways to execute a spring slide: two involving the move after naturally leaving any sliding tile and two after overriding a force floor. When Chip is deposited at the end of a stream of sliding tiles, the spring slide is possible if Chip has slid over an odd number of sliding tiles since his last voluntary move, as the last slide will have been the first half of one turn. This can also be accomplished over an even number of sliding tiles if Chip waits [1/2] before sliding, as the [1/2] moves will cancel; this is rarely useful, however.

By contrast, when overriding a force floor, one fewer slide than the number of sliding tiles has actually occurred, so the numbers are reversed in this case: if this is an even sliding tile, a spring slide normally occurs on the two turns after the override, and odd numbers can be handled by waiting [1/2] likewise. 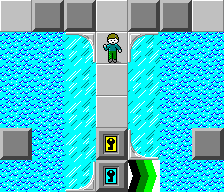 When Chip starts to build across the ice to the west, he has several opportunities to use spring sliding. The first block that passes the west ice column lands on [1, 3], and coming back from the dirt is the first chance for Chip to use it.

Retrieved from "https://chipschallenge.fandom.com/wiki/Spring_slide?oldid=15534"
Community content is available under CC-BY-SA unless otherwise noted.