You can find the page you were looking for at:
https://wiki.bitbusters.club/Suction_Solution.
This wiki is no longer maintained.

Suction Solution is the fourth level in Chip's Challenge Level Pack 3. It was created by Mike Lask, who is the first designer to have levels in CCLP2 and CCLP3. The boosting at the beginning of the level requires careful use of spring slides, as only [1] can be spared before bold is out of reach. Perfect boosting will yield 342.0 at the yellow lock.

Retrieve the block and throw it into the water at the end of this short maze, then pick the block out from the northwest corner and move it through the maze across the north edge of the level to a second bomb. Behind another block and water is the block necessary to complete the remainder of the level: push this D on the way towards the fire boots. Without collecting either of them yet (in MS only), push the block 2U L 5D >R R, collecting both boots and fixing the block into place.

Sprint around to the teleport entrance behind the fire in the northwest and use the block to access another block with a green key underneath; plainly visible from here is the green lock guarding one of the chips at the start. This technique received the official name of window shopping after the level of the same name, and is commonly used to make it possible to fight many of its devious cook devices.

Temporarily retreat to collect the sixth chip, then zigzag through the recessed wall and socket spirals to the last chip and back to the exit. 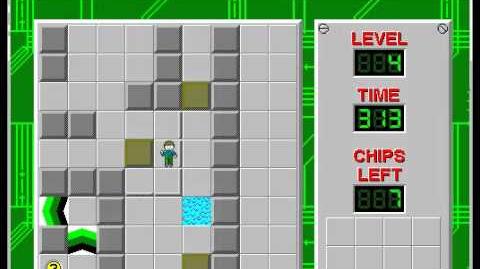 You can find the page you were looking for at:
https://wiki.bitbusters.club/Suction_Solution.
This wiki is no longer maintained.