This article is about the monster known as a teeth. For the 119th level in CCLP2, see Teeth (CCLP2 level).


You can find the page you were looking for at:
https://wiki.bitbusters.club/Teeth.
This wiki is no longer maintained.

The teeth, also known as a frog, is a monster in Chip's Challenge that follows Chip wherever he goes, but only moves every other turn. Which turn they start to move on is dependent on odd and even step. Fortunately, their navigation skills are poor. The teeth has an almost sentient programming, which makes it the most complex monster in Chip's Challenge (followed by the tank).

Like Chip directed by the mouse, teeth use the moving Chip (it will not chase any others, although it can kill one) as their base point. A teeth moves either vertically or horizontally toward Chip one square at a time, always taking the longer path, and vertically if tied. However, if this move would be illegal because of some obstacle, it will go the other way if that is a legal move, and if not, it will stay put until Chip moves somewhere that allows it to make another move. If a teeth is already on Chip's row or column, obviously there is only one possible move, which will not be taken if it is illegal.

It is important to know the way teeth move in order to solve Morton in particular: when Chip is approaching "Morton's" (the teeth's) "lair", he must leave a chip behind to force Morton to move another way.

The other important behavior of the teeth is the effects of the Controller and Boss Glitch on it. 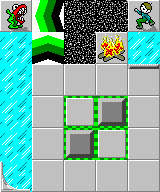 If an outside object were to switch the toggle walls as the teeth was sliding, it would move UR, but then stop since both the vertical and horizontal spots are blocked off. If the walls change again, it will continue 2U. If Chip walked 3L or 3D, the teeth would respond with L or D on its next moving turn, assuming of course that Chip still remains in a position where this move will be taken.

Retrieved from "https://chipschallenge.fandom.com/wiki/Teeth?oldid=18254"
Community content is available under CC-BY-SA unless otherwise noted.