View source
watch 01:36
We're Getting Mutants in the MCU - The Loop
Do you like this video?
Play Sound

The Teleport Skip Glitch is a glitch in the MS version of Chip's Challenge, found sometime before December 23, 2007 by David Stolp and used to add one second to the bold time of Skelzie.

In the MS ruleset, moving objects in a given move are processed in the following order:

However, MSCC allows for mouse Boosting which can give Chip a move before the sliplist at the start of a new move but after monsters have moved at the end of the previous move. Any teleports a monster entered are on the lower layer for Chip's move and as such are ignored when choosing the destination teleport. Interestingly, for the monster choosing a destination the teleport Chip is in is also considered blocked and this monster will skip a teleport as well.

For the glitch to occur, Chip has to have just left a sliding tile such that he can enter the teleport before the monster leaves the sliplist. 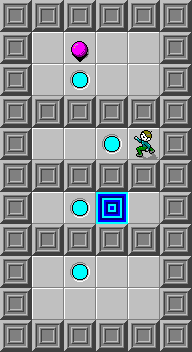 To get to the exit in the fastest way possible, Chip clicks the square UL from where he is standing, such that he first moves [1/2] *[-U >L]. This utilizes a special property of mouse clicks in that if the primary direction of the mouse click is blocked, the other is immediately selected on the next turn.

If there was one object stuck on the sliplist elsewhere in the level in this example, the resultant Slide Delay would allow this same route to be executed in Tile World with L [1/2] R.

In Graduation from CCLP1, Chip must enter a teleport towards the end in a room with teeth. The designer intended for Chip to walk around the corridor to the other side of the second teleport so as to teleport U into the exit area, but if Chip releases a teeth, enters the first teleport, and then clicks on the second teleport at the moment the teeth is scheduled to enter the first teleport, Chip will teleport back to the first teleport and then immediately slide across it (there are no other teleports in the level) instead of teleporting back to the teeth room. This saves two seconds relative to solutions which do not use the glitch.

In Suburban Legend from CCLP4, a teeth can again be used to skip the partial post to the chip to the left of the exit. The exact workings of the route are not public, though the glitch is known to save one second over the best non-mouse route.

At this writing, Tile World does not recognize the Teleport Skip Glitch due to an inaccuracy in when mouse moves are handled. Tile World (as of versions 1.3.2 and 2.2) will always process a mouse click on the second half of a move, which prevents both mouse boosting and moving twice between sliplist updates. This different timing makes it impossible to enter an occupied teleport without slide delay.