You can find the page you were looking for at:
https://wiki.bitbusters.club/Tool_Box.
This wiki is no longer maintained.

Tool Box is the 29th level in Chip's Challenge Level Pack 3. It was created by John Lewis, and is the first obvious itemswapper level in CCLP3. Rather uncommonly, it uses several buttons as stages, and like Which One Next?, there are some wrong ways to solve the level where Chip fails to trade for the same item and a chip.

Given the large number of stages with items and tasks to collect, mapping out a route can be difficult, but a valuable technique for tracking progress in such levels was promptly developed: using CCDesign, place a conspicuous tile at the point Chip enters one area, such as an exit or gravel, and use the infinite undo/redo functions at will such that the order of changes to the level (within the editor only) matches the desired order of entrance to each station.

The level can then be undone and redone indefinitely to read any part of the intended route out of the editor, as long as the changes are not saved; this strategy, entitled ghosting, can be used for all levels with complex task ordering, not simply itemswappers. For changes to levels such as Toggle Bust, the player can duplicate the levelset and make such alterations for the singular purpose of reading them; such levelset is never meant to be played.

Ultimately, the map of Tool Box will, though it uses only the CC tileset, function similarly to this ordered map of the 37 different stations including the central chip: 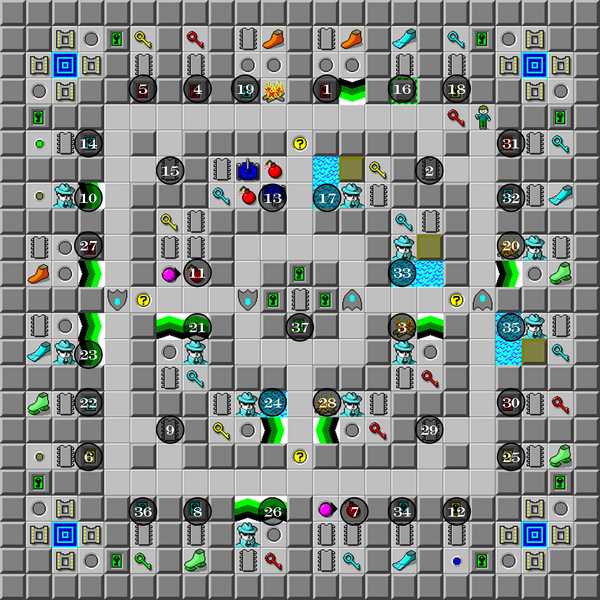 
You can find the page you were looking for at:
https://wiki.bitbusters.club/Tool_Box.
This wiki is no longer maintained.

Retrieved from "https://chipschallenge.fandom.com/wiki/Tool_Box?oldid=13708"
Community content is available under CC-BY-SA unless otherwise noted.