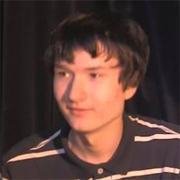 Tyler Sontag is a famous Chipster who has made various major contributions to the CC community. Beginning in 2004, he began constructing a levelset known as TCCLP. Tyler's first known appearance or interaction with the Chip's Challenge community began in 2006 when he appeared on the newsgroup, after creating a Chip's Challenge website. Later in 2006 he created http://www.geochip.webs.com, which housed various files relating to Chip's Challenge, but it is now defunct.

Work on his first set, TCCLP, began in May of 2004, and was completed in mid-2007. It contains 350 levels, making it the second-largest set at the time, behind Jacques.dat. Albeit heavily flawed with many of the levels being unsolvable, this set is still available nearly ten years after its creation and is one of the most well-known custom sets.

Tyler has released several more sets since TCCLP. He began TCCLP2 in early 2009, but ditched it in late 2009 due to constraints from being hosted on pieguy's site. TCCLPRejects began around the same time. The early levels were levels that he felt were too poor to be placed in TCCLP or TCCLP2, but the set soon became a place for Tyler to experiment with various glitches and unorthodox concepts, similar to EvanD1. It is now the only CC1 set he provides updates to, and is quite sizable at 179 levels. TCCLPpgchip started in late 2008, which was a short set meant to be played with the ice block path.

When submissions for CCLP3 were being accepted, Tyler submitted TylerSubmissions, which consisted of his 35 favorite levels from TCCLP and TCCLP2, all made Lynx compatible. Seven of these levels appeared in CCLP3, Entrance Examination, Jumble, All About Blocks, Coal Mine, Civilization of Creatures, Pushy, and Everybody Get Dangerous. After CCLP3's release, he added eight more levels and removed three, rebranding the set as TS1.

When CCLP1 was announced, Tyler began work on TS0. The levels were intended to have difficulties appropriate for CCLP1, but he felt this was too restrictive and went on to design levels such as Lounge Act. It was completed in late 2012 and contains 40 levels, the same number as TS1. CCLP1 contains six of its levels Colors for Extreme, Tunnel Clearance, Badlands, The Sewers, Metal Harbor, and Thief, You've Taken All That Was Me. For CCLP1, he additionally assembled DanielB-Lynx, which is a collection of level from DanielB1 and DanielB2 modified to be Lynx compatible. He received permission from Daniel Bouwmeester to submit the set for CCLP1 consideration.

Before was CCLP1 released, he also designed a level set called TS_Tutorials, containing 18 candidates for CCLP1 lesson levels. Three of these got in the final set: Key Pyramid, Block Party, and When Insects Attack.

He began TS2 during CCLP1's development to prepare for the next community pack CCLP4. He ceased progress at the end of 2014 with only 22 levels finished and decided to focus on CC2 level designing when it was released the following year.

Tyler quickly released a small level set after CC2 was released in May 2015 named TSAlpha. He built it slowly over the next three years before finalizing it in mid-2018 with 40 levels. The set is notable for its use of unsupported tiles that he co-discovered with random 8 such as the zero directional block, blank no signs, and voodoo tiles. To complement TSAlpha's release, Tyler released TSNull, a smaller set containing reject and experimental levels.

Tyler's design style in his TCCLP days were eclectic, but he eventually found a distinct style in the late stages of TS1 and TS0. All the levels in his TSx series are Lynx-compatible, and tries to conform to pedantic Lynx rules as often as possible. The TSx levels are usually medium to hard difficulty, and often contain a large number of recessed walls and partial posts. He has become infamous for including adapted Sokoban sections in his levels, usually involving three blocks. His TCCLPRejects levels exploit many glitches, such as data resetting, the multiple tank glitch, and various other oddities. In his CC2 sets, he frequently uses bowling balls, logic gates, and railroad track, the last of which he considers the most verstaile addition to CC2.

When CC2 was released, he picked up some new records and confirmed, mostly focusing on the time bolds, but has not optimized often since.

Tyler has pulled a Chip's Challenge-related April Fools' Day prank every year from 2010 to 2014.

Retrieved from "https://chipschallenge.fandom.com/wiki/Tyler_Sontag?oldid=18985"
Community content is available under CC-BY-SA unless otherwise noted.