You can find the page you were looking for at:
https://wiki.bitbusters.club/Writers_Block.
This wiki is no longer maintained.

Writers Block is the 81st level in Chip's Challenge 1. The center of the level is made up of sixty-seven blocks shaped in the letters "THINK", and two at the start, as shown in this full map: 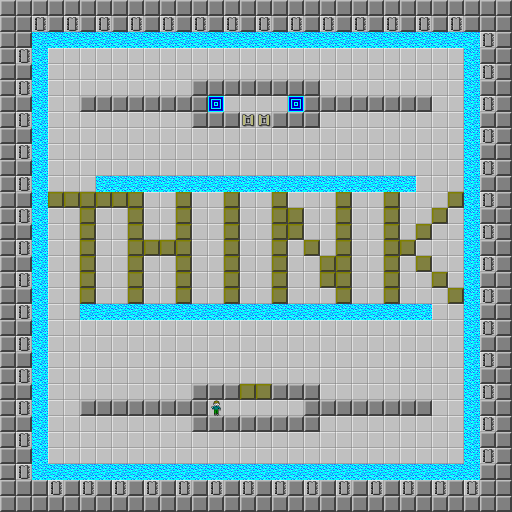 One block is required to remove a key water space (the second water space on the top row), four are needed to complete the corners, eight are unusable, and the other 56 will each access one chip.

To make a rather long story short, use the THI plus one of the blocks at the beginning, except for four blocks (one which will end up next to the N, two that will be laying around, and the one that you have to shove into the water) to wipe out all the chips on the left side from the eighth one on the top to the eighth on the bottom. This will leave 26 chips left. Now, collect the other block from the start, collect one chip, and then use the first six blocks from the K for another six chips. Shove the sixth block on the left of the K 2L, use the remainder of the K, and then shove aside the second block on the right side of the N, which frees the remainder of the N that is usable.


You can find the page you were looking for at:
https://wiki.bitbusters.club/Writers_Block.
This wiki is no longer maintained.

Retrieved from "https://chipschallenge.fandom.com/wiki/Writers_Block?oldid=17309"
Community content is available under CC-BY-SA unless otherwise noted.